An interpretation of the symbols above the Great Pyramid original entrance

The Great Pyramid remains today as the last standing wonder of the ancient world. An ancient wonder and an ancient mystery and one that is layered in mysteries. One layer of these mysteries are the symbols carved inside another symbol over the pyramid entrance. The first symbol being the hieroglyph Djew. 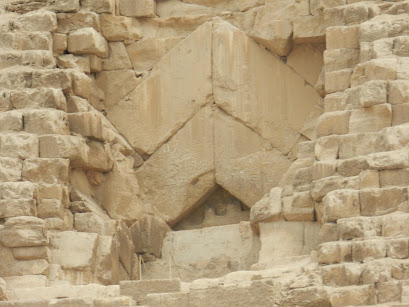 The Djew hieroglyph is not inappropriate to be there in that it transliterates as “mountain” or “cosmic mountain” and archeologists believe that pyramids were symbolic mountains. Further some believe that this Djew of the Great Pyramid originally may have had a golden ball cradled in it.  This a definite possibility in that by adding such a ball changes the Djew into the hieroglyph called the Akhet.

All this background brings us to the symbols found on the face of the arch of the stone carved Djew symbol over the Great Pyramid entrance. 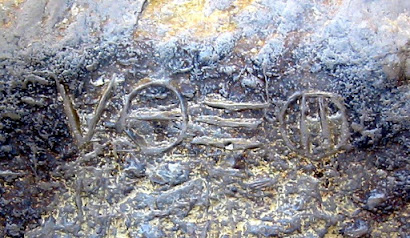 The image above shows the four symbols and how this image is normally seen and shared when it is discussed.  I have written about these symbols before and lectured on them and believe there are several interpretations, but I have one interpretation that I had put forth before from a different perspective that I think is valid and has to do with the theorized geodesy of the Great Pyramid.

Many researchers consider the Great Pyramid a geodesic model of the earth at a 1/43,200 scale. I write about the possible reasons for this scale in detain in my book; The Spirit of Light Cubit but for brevity here I will focus on a small portion of these aspects. Some of these aspects include research that shows the perimeter of the GP is equivalent to 30 seconds of latitude at the equator and the perimeter of the Great Pyramid measured from its “socket holes” is equivalent to 30 seconds equatorial longitude. Further, though not “exactly on”, the Great Pyramid is located at 30 degrees latitude and 30 degrees longitude. All this may be considered coincidental by some, if so I think these are some really big coincidences.

This brings us back to the symbols found inside the arch of the stone Djew/Akhet symbol of the original entrance to the Great Pyramid (See image). Some may have seen these symbols before, and I have pondered them for a long time. Then some years back due to some odd coincidences (synchronicities) of my own I had an “aha” moment. In books and elsewhere I have always seen these symbols as viewed in the top image and have seen many interpretations of these symbols and I think more than one can be valid. Now if you look at it from the other side (turned 180 degrees) where the “V” now is an upside down "Λ", I suddenly saw a Greek formula. A circle with 2 vertical lines through it (longitude), then 3 horizontal lines meaning “equivalent to”, then another circle bisected by a horizontal line (latitude) and finally a Λ. In Greek this capital Λ is lamda, the 11th letter in the Greek alphabet with a numerical value of 30. In this fashion I am reading in these four symbols as; the longitude is equivalent to latitude of 30. I have presented this in the past and have been surprised this has not garnered more interest with GP geodesy. 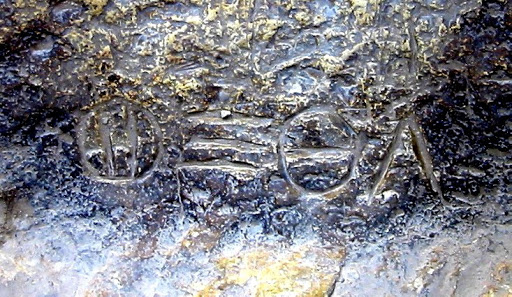 There are several other "30" connections to the Great Pyramid both in its measurements and celestial alignment, but for the purposes here, I think what has been presented should suffice. In conclusion I would posit that these symbols were added during the Egyptian Ptolemaic (Greek) period. This is straight forward, elegant and fits the attributed geodesic aspects of the Great Pyramid.