The Floating Stones of the Great Pyramid

The Floating Stones of the Great Pyramid


The Great Pyramid a remaining ancient wonder and still a wonder for the modern times.  This incredible edifice has a height of a 48 story building with each side longer than 2 ½ football fields; it has a foot print of 13 acres, and is the tallest human made structure built until the late 19th century.  It is estimated to have 2, 300,000 stone blocks with each block having average weight of 2 ½ tons with some blocks weighing over 70 tons. It alignment to the cardinal points of the compass is just 3 minutes of a degree off perfect and to this day after thousands upon thousands of years it is less than an inch of being perfectly level. The interior passage ways and rooms are assembled so exactly that you cannot get a credit card between the seams of the blocks. It is an unbelievable scientific engineering and architectural phenomenon that’s construction is still a mystery today. 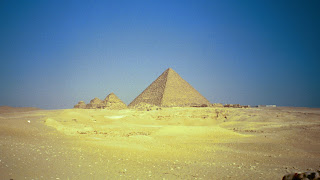 Many theories have been put forth on how it was constructed; first by slaves, now by a city of free Egyptian artisan and engineers, perhaps with linear ramps, or with spiral ramps, perhaps with block and tackles, or with kites to lift stones, theories even include the assistance of extraterrestrials.


How it was constructed can also be found in the Edgar Cayce readings as cited in the beginning of this article: “By the use of those forces in nature as make for iron to swim. Stone floats in the air in the same manner” (Reading 5748-6).


So how do stones float in air with what similar forces to “make for iron to swim”?


All liquids and gases in the presence of gravity exert an upward force—called buoyancy—on any object immersed in them. If the object is less dense than the liquid or gas, buoyancy will make it float. A cork floats in water because it is less dense than a cork-size volume of water. But it won’t float in air because it is denser than the same volume of air. (https://howthingsfly.si.edu/gravity-air/buoyancy )


Objects can float in the air thanks to buoyancy, which an upward force that the air exerts on them. The objects must weigh less than the air it displaces., this is different from lift.


Now, new scientific discoveries are adding credence and validation to the Cayce reading on the method of construction with the possible us sound to create this buoyancy.  Below are excerpts from this scientific new research.


"It would be really interesting to see if these effects are measurable," said Esposito.


Scientists detail their findings on March 1 in the journal Physical letters for review,


This new discovery that ordinary sound has the potential ability to create a negative gravitational mass thus having the ability of repelling or pushing objects in the opposite direction of gravity having the effect of the objects bobbing in air like a corks in water or having “stones float in air” . This finding from the scientific community and this burgeoning discovery opens the possibility of sound being used to lift objects and further shows just how incredible the information in  Cayce readings have been for so many years and continue to be today.
Posted by Don Carroll at 10:41 AM