The Great Pyramid’s missing Capstone: the culminating the elegance of the Spirit of Light Cubit


The Great Pyramid’s missing Capstone: the culminating elegance of the Spirit of Light Cubit. 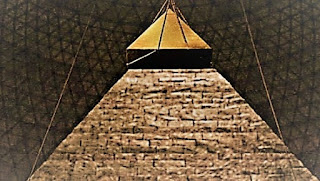 They already know how extraordinarily well the use “Spirit of Light"Cubit” fits in defining the dimensions of the Great Pyramid and its symbolic significance in the ancient Egyptian spiritual philosophy, along with leaving a message any mathematician would recognize.

Further I have theorized that, from the long tradition of ancient measurements being derived from body proportions that this length represented the human spine (pathway of the Kundalini and higher consciousness) and was to be specifically implemented at sacred sites in focusing such initiations to raise our consciousness, to bring Heaven and Earth together in ourselves.  In pertaining to the Great Pyramid and the Giza Plateau (the plateau of Rostau) this is clearly evident in that the plateau was dedicated to Osiris and Osiris symbol was the Djed which represented Osiris’s spine (hidden in plain sight).  They even had a ceremony; “Raising the Djed” representing spiritual resurrection rebirth and stability. Also that Egyptologists define pyramids as cosmic engines representing the uniting of Heaven and Earth.

This all leads to the culmination in the dimensions of the Great Pyramid missing capstone. The capstone, what the ancient Egyptians revered as the Benben stone which symbolized their Benu bird, their immortal bird which, rises up in brilliance in rebirth and resurrection and is associated with the resurrection of Osiris, a similar correlation to raising the Djed..  Many believe it was the source for the Greek lore of the Phoenix.

The Benben stone, the capstone, found on every Egyptian Obelisk (properly named in Hieroglyphs as a Tekhenu and translated as: “to rise up on brilliance” and symbolized a frozen shaft of light with their immortal bird atop it on the primordial land and water of Earth). This same Benben stone culminated their pyramids (pyramids also believed to represent frozen mountain/stairways of light) as the capstone with its same meaning and as a pyramid on a pyramid, completes the circuit. Thus creating a sacred functioning “cosmic engine” that united Heaven and Earth and completed the spiritual rebirth and resurrection in higher consciousness from whence we once were.

The Great Pyramid’s Benben stone has been missing since time immemorial, it is believed to have been electrum (a combination of gold, silver and copper) covered course stones. The original Great Pyramid height is considered to be about 480.8 feet and that today its height is 455.4 feet, per the mainstream Egyptologists it is missing the top 7 horizontal courses from its original 210 stone courses; thus missing 25.4 feet of the original structure; basically the Ben-Ben stone or capstone is gone. As an aside, the Egyptian authorities had planned to put a golden capstone by helicopter on the Great Pyramid at midnight , New Year’s Eve, 1999, for the millennium (yes, 2000 would have been the correct date) during a large announced celebration.  This announcement apparently created such uproar from many groups for multiple reasons from the political to the esoteric that the capstone ceremony was cancelled.  We probably will never know the true reason.

Now, here is the incredible, elegant aspect of all this: the missing 25.4 feet in the great Pyramids height (the top 7 courses), when converted into Light Cubits is 11 (Eleven!!) (25.4 feet versus 25.2 feet). So the top 7 horizontal courses equate to a missing vertical height of 11 Light Cubits, creating a proportion of 7 horizontal courses to 11 vertical units of measurement.  I find this astounding in that the proportion of the original entire height of the Great Pyramid to its full width is 7 over 11!!  The dimensions and courses of both the Great Pyramid and their proportions of its’ capstone of 7 and 11 reflecting and thus magnifying each other.  I believe the Great Pyramid and its’ capstone are the only pyramid and capstone that has so perfectly designed to reflect and unite itself in such a significant and elegant manner.   Just like the Hermetic axiom of; “As Above, So Below”, which represents the not only the reflecting but the uniting in One.

These results occur primarily because of the unit of measurement noted in the Cayce readings for Ancient Egypt’s temples and pyramids in such a beautiful, elegant manner, much as the main spiritual philosophical theme found in the Cayce readings advise us of our purpose, like the purpose of the Great Pyramid with its capstone, is to be bring spirit into physicality, spiritualize matter, yes, unite Heaven and Earth together in ourselves.  It is important to remember that according to the Cayce readings the Great Pyramid was constructed to be a prime facilitator of this purpose, everyone still has the ability within themselves, here and now.