Dirt has a microbiome, and it may double as an antidepressant

The Cayce Readings find validation once more!
by Don Carroll

TEXT OF READING 5125-1 F 30 (Secretary, Baptist). This Psychic Reading given by Edgar Cayce, this 19th day of May, 1944
R E A D I N G : Born in Bokhoma, Oklahoma.
2. EC: A new vibration! Very good. Quite an interesting fact about people born here [Bokhoma, Okla.?]. One out of ten thousand would ever commit suicide. Something in the soil; get it between your toes and you'll never commit suicide. 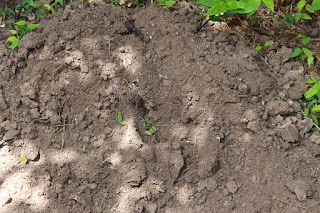 73 years ago Edgar Cayce went into his meditative trance state to give a psychic reading requested by a 30 year old woman.  Though the majority of readings Cayce gave were medical related, what would be called a medical intuitive reading today, in this case, the reading was consider a “life reading”. A life reading generally provided only past lives experiences with their gains and losses that would assist the person in the present life along with observations on the persons present life. On occasion during the reading sometimes other observations, like an aside, would be made.


This reading was one of those cases that provided additional information.  The reading has sat in the archives for over seven decades with that curious statement that “something in the soil” helps prevent suicide. Though there are many causes for suicide, major causes are considered from mental health issues such as stress, depression, anxiety, and PTSD.  Until recently this has enigmatic statement has lain fallow.


In the 1940’s the idea that something in the soil could help prevent suicide or stress is not something that medical science would have been seriously considered, or the source of such an idea, to state kindly. .  Yet, here, over seventy years later is the scientific evidence that the reading was correct.


Now science is once more providing validating evidence for the material contained in the Cayce readings. Recent investigations confirmed by multiple medical researchers have found certain soil based bacterium reduce stress and anxiety.


“A new study just revealed a big one concealed by bacteria living in the dirt beneath us, and it could move us closer to the development of the long-theorized “stress vaccine."
The researchers injected the rodents with M. vaccae prior to exposing them to a stressful event, and the shots both prevented a “PTSD-like syndrome” in the short-term and diminished stress reactions later on.”
By David DiSalvo :Senior Contributor.  https://www.forbes.com/sites/daviddisalvo/2019/05/30/science-just-moved-a-step-closer-to-making-a-stress-vaccine-from-bacteria-living-under-our-feet/#269cd6753a43

In another article on this recent research it states:


…the bacteria injection “significantly improved patient quality of life,” O’Brien wrote in the paper detailing the findings. Her patients were happier, expressed more vitality, and better cognitive functioning—
Researchers have already found clear evidence that childhood exposure to outdoor microbes is linked to a more robust immune system; for example, Bavarian farm children who spent time in family animal stables and drank farm milk had drastically lower rates of asthma and allergies throughout their lives than their neighbors who did not.
Dirt has a microbiome, and it may double as an antidepressant by Zoë Schlanger, May 30, 2017.
https://qz.com/993258/dirt-has-a-microbiome-and-it-may-double-as-an-antidepressant/

The Cayce readings time and time again continued to be validated in multiple different categories.  It’s time to pause and ponder such validations for the greater ramifications on the overall contents of the Readings. It could be world changing.